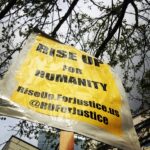 This blog was written by Nikki, an Office Team Intern with the San Jose Peace & Justice Center. The opinions expressed in this post are hers. The photos were taken at the protest by Nikki.
On April 7th, I attended a nationally coordinated protest locally hosted by Rise Up for Justice (#RU4J) and the Friday Night Peace Vigil. We protested Trump’s escalation in Syria to demand an end to the U.S. war against Syria. This escalation was an immediate action after the chemical attack that killed 89 people on April 4, 2017. Syria blamed terrorist groups for the attack, and Russian President Putin, implied that the forces that have been trying to frame the regime of Syrian President Bashar al-Assad carried out the attack. The attack in Syria prompted the United States to launch its first military strike on the Syrian regime. President Trump ordered the launch of 59 missiles at the airbase that was home to the warplanes that allegedly carried out the chemical attacks.
It has been unclear who was responsible for the chemical attack in Syria. It has been difficult for me to choose where I stand with this issue. It breaks my heart every time I read or see what is happening in Syria. I cannot imagine what they are going through each day and night, never knowing where the next bomb will hit, people have been living in constant stress and fear. I think in some parts of the world, in some situations, it is justified for the U.S. to interfere if human rights laws are being broken and innocent people are being killed. If nobody takes an action and help these innocent people, then who will? However, I also understand that the U.S. shouldn’t be policing the world. I think there should be a line that the U.S. should not cross.
I am unsure whether or not I support this strike. I am happy that the government finally took an action against the Syrian regime. However, I do not support Trump’s sudden response to strike against a regime without actual proof that the chemical attack was done by the Syrian regime. Also, bombing a Syrian air based to send a message to the Assad regime is just not enough. Less than a day after the U.S. strike, new airstrikes targeted the same town. It has been unclear who was responsible for the second attack. At least one woman was killed and three others were injured.
While attending the protest, I saw many people holding signs and standing in front of the MLK library. Although I was unsure about how I felt about this strike, I also felt it was not the right action to take. I knew that the strike would cause people to either be for it, against it, or like me, be unsure. Being at the protest, it made me feel great. I loved the energy and seeing how many people were there to protest against the strike while holding signs and just peacefully protesting. Many people honked their horns as they drove passed us.