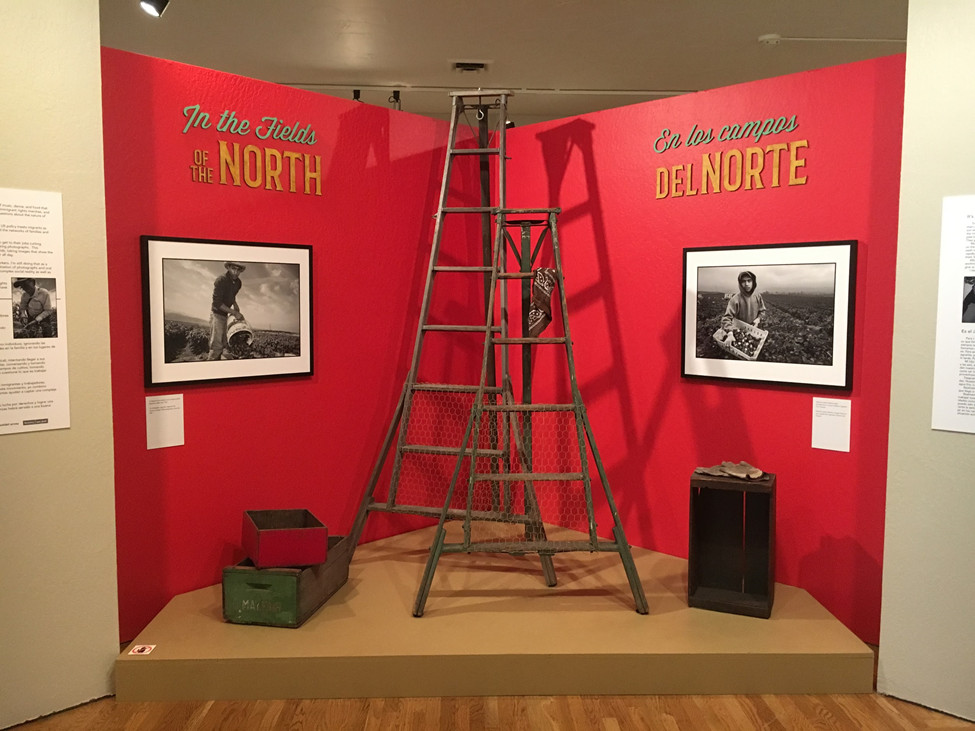 Within the intimate beige walls of History Park’s Arbuckle Gallery, History San Jose is currently displaying In the Fields of the North / En los Campos del Norte, an exhibit with hard-hitting oral histories and sobering photographs that bring to light the mistreatment and poor working conditions migrant workers face in trying to make a life for themselves.
This exhibit, translated into both English and Spanish, is a collection of works by David Bacon—a photojournalist, activist, and former union organizer. For over 30 years, Bacon traveled with these laborers during harvest seasons and even crossed borders with them as they searched for work.
Upon entering, the crackling of old black-and-white footage coming from a small television in the back greets visitors. The sounds of a rousing speech delivered by Cesar Chavez during the Delano Grape Strike and the voices of the United Farm Workers of America singing in unison fill the gallery.
The photographs on the walls depict workers of all ages toiling in the fields. Men, women, and children alike are shown packing celery and picking jalapeño chilies. The angle of the photos is what is most striking. Bacon gets up close and personal; he chooses to take many of the pictures from either at or below the eye level of the worker. This low perspective makes the photographs immersive and almost authentic. It is as if we are also bent over, laboring alongside the other workers in the field.
Bacon also delves into the home lives of these people, capturing photos of them in shacks and workers’ cabins. In these pictures, the workers stare directly back out at the viewer with intensely somber expressions as their eyes tell of sacrifice and struggle.
Scattered throughout the gallery are snippets of the oral histories of some of the migrant workers, including an aspiring rapper and a mother who longs to go back to school. They are touching, visceral, and raw. As they speak of the hopes, dreams, sacrifices, hardships, and pain of the workers, they also force us to confront the stories that make us most uncomfortable. They serve Bacon’s purpose of reminding us to not forget the humanity of those who produce our food.
Further into the gallery, there is an area for people to sit and read books relating to the lives and labor of migrant workers. This space is complete with beanbag chairs, bookshelves, and tables. It is a place for visitors to contemplate what they have already seen and to explore those topics from a different perspective, whether it is through one of the picture books, the biographies, or the informational books.
As a whole, the exhibit challenges people’s stereotypes about migrant workers and the perceptions that these workers come just to take away American jobs. It shows us that despite the arduous nature of the labor, migrant workers continue to endure it for the hope of a brighter future and a better quality of life for their children.
Bacon makes the point that awareness needs to be brought to the plight of migrant workers, but at the same time, he demonstrates that they are a resilient people; they are to be admired, not pitied. They have always found ways to overcome their hardships through solidarity, whether it was street protests or the formation of social justice organizations.
The next time you visit the grocery store or the supermarket, the next time you take a bite out of that strawberry, take a moment to think about where your food came from and the people who made it possible for you to complete your meal.
In fact, it is best said by Alma Flor Ada’s Gathering the Sun, one of the picture books in the gallery bookshelf: “Gracias te doy, campesino, por los frutos de tus manos.”
“Thank you, farmworker, for the fruits your hands have brought me.”
Take a visit to History Park’s Pacific Hotel to see this thought-provoking exhibit for yourself: History San Jose Website.
It will be on display until June 3.
Thank you Lan, a SJPJC Volunteer for writing this piece and sharing these important reminders.