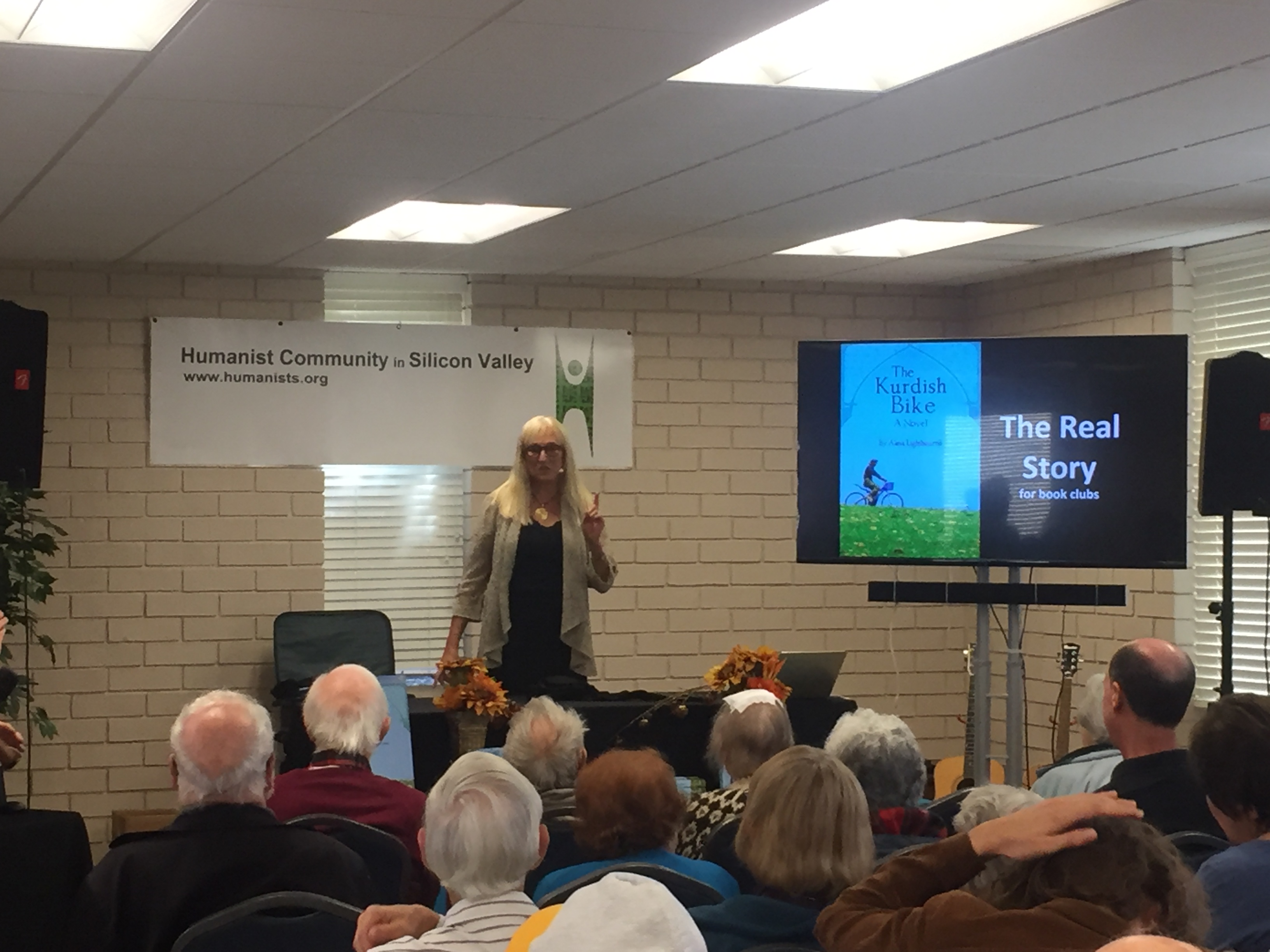 By Abiola A, a student volunteer from San Jose State University
This was a talk about Alesa Lightbourne’s experience in Kurdish Iraq where she went there to teach abroad but ended up learning about herself and the new country she was living in. Her book and her presentation were about her time there and the experiences she had with the people there in 2010.
Her story started with her son asking her a simple question, “if you could do anything, what would you do?” She turned her answer into action and decided to teach abroad in Kurdistan with the Peace Corps. She explained the origins and demographics of the Kurdish people which started with them spread out among the lands of Iraq, Iran, Turkey, and Syria. They are the world’s largest group of people without a country and have been a people since 500 B.C. The idea of “divide and conquer” was prevalent in the tactics of leaders like Winston Churchill and others like him, because they knew how much power people like the Kurds had if they united. Also, leaders knew the Kurds lived where the world’s major oil resource was. Having them split among their enemies’ lands made them easier to control.
When Alesa was there, she asked some men on the street what they wanted in life and they all said they wanted to be free and unified in Kurdistan. They were all once promised that they would be free but just like many other treaties, it fizzled out and the promise was never kept. Failed policies like that and the Al Anfel genocide are the reasons why Kurdistan is in the present state. The Al Anfel genocide led to the destruction of 4,000 of 4,655 towns, ruined their agriculture, and killed many men while placing women into concentration camps and brothels.
As for the Kurdistan Alesa lived in, she had an unexpected and last-minute change of plans in terms of her teaching. She expected to teach adults at a university but ended up teaching middle school because the students’ last teacher was kidnapped and they were without a teacher for two months. It was an adjustment for her because they have a stricter structure for teachers to follow for those grade levels compared to college students. For example, administrators and other staff would walk by the classrooms to make sure the students were on the scheduled lesson (by checking their page number) and made sure the teachers didn’t sit down every day.
Through teaching her students she learned the harsh reality of female genital mutilation. A girl went up to her and asked how Alesa felt when she was mutilated. Alesa was shocked learning that such a young girl thought it was normal all over the world for girls and women to have their clitorises cut off. Alesa found herself in conflict of learning to be tolerant of aspects of other cultures, including genital mutilation. She also was aware of how Kurdish women weren’t allowed to do things many women could do freely in the states like even riding a bike. She dressed like a man (or more gender neutral than she usually dressed) and explored Kurdistan on her “Blue Angel,” bike. While exploring she met a woman named Bezma, who was studying to become an English teacher. Alesa became well acquainted with Bezma and her family and learned how similar her life can be with people on the other side of the world, despite their apparent differences.
I don’t want to give too much away about her book but after attending her presentation, it was clear that it was a life changing experience. So much so that enriched her life in a way that motivated her to tell her story to the world in her book, The Kurdish Bike: Life in a Village in Kurdish Iraq.
If you haven’t read it, go check it out!