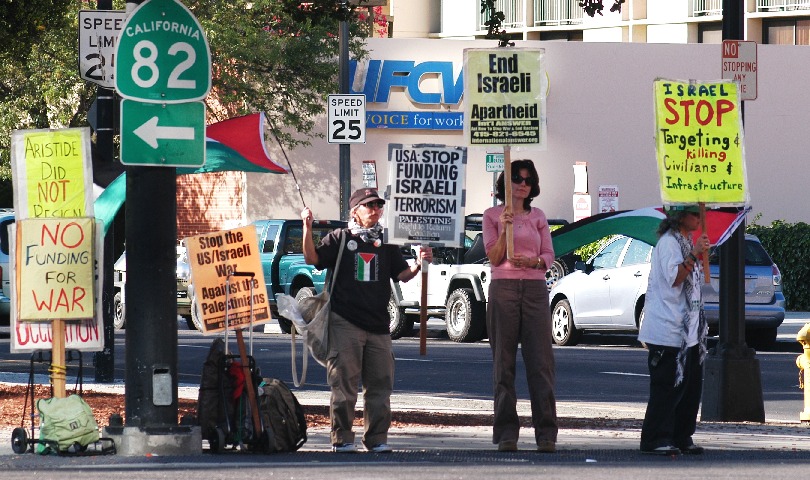 Thursdays
4 to 5 pm in Hayward

Sidewalk by the 5 Flags Park at Mission, Foothill, and Main Street, near “D” Street, Hayward
You are invited to attend a weekly Free Palestine Vigil hosted by South Alameda County Peace and Justice Coalition. Signs call for: “The Removal of the Illegal Israeli Settlements”, “The End of the Israeli Blockade of Gaza”, “The Right of Return for Palestinians”, “The Boycott of Apartheid Israel”, “Stop Aid to Israel”.

Fourth Fridays
12 to 1 pm in Sunnyvale:

At the corner of Mathilda Avenue and Java in front of the Lockheed Martin main gate.
Please join the Pacific Life Community for a monthly vigil against nuclear weapons. Every Friday during Advent and Lent.

#FridayPeaceMLK in front of the Martin Luther King Library, 150 E. San Fernando Street.
This vigil began with the U.S. Invasion of Afghanistan in October 2001 and has been ongoing for 18 years.

Winchester and Stevens Creek, near Valley Fair and Santana Row
This protest began with the US invasion and occupation of Iraq in 2003 and has been ongoing for 16 years.