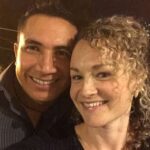 We had scheduled a presentation by Karen Spring, coordinator of the Honduras Solidarity Network for the evening of September 25. Unfortunately, Karen had to return to Honduras on September 21.

As she explains in THIS VIDEO, “I had to leave to go back to Honduras earlier than I had planned because of the situation with my partner Edwin Espinal. Edwin was a political prisoner, held in a maximum security prison for 19 months. He was released on August 9 and we just found out that the government of Honduras wants to send him back to prison.
Because of his imprisonment he has a number of health problems.
I had to head back to Honduras because the government is cracking down hard on anyone who speaks out and protests.
WATCH THE VIDEO as Karen explains why so many Hondurans are fleeing and heading for the US border.

Ask Ro Khanna’s wife to divest from the War Machine!

Cruel and Unusual Punishment at the Southern Border