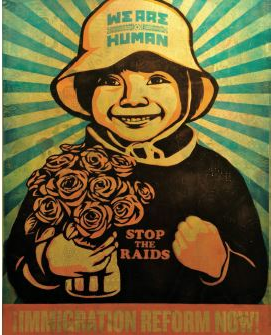 This blog was written by GM, a spring 2017 intern at San Jose Peace and Justice Center after attending Immigration in the era of Trump training.
Before becoming a student at San Jose State University, I didn’t know what I wanted to major in. Over the course of my academic career I was a Marketing major, then I changed it to Administration of Justice, then to History and finally to a Justice Studies major.
My indecisiveness was due me desire to do something special and be effective in helping and changing lives. Choosing Justice Studies as my major was the best choice for me because I got to learn about the many aspects of how laws and policies can have a huge impact in creating injustices for many citizens, specifically minorities.
My major created the opportunity for me to find this internship that relates with what I want to accomplish. Michelle Cordova, the coordinator for the Immigration Relief Project at the Peace and Justice Center, initiated the training process for immigrants’ rights. As I attended the first day of the training as an intern, I saw many individuals willing to sacrifice their time and energy to help those in need. These volunteers were especially eager to help given current social and political crisis that plagues many immigrants. Ms. Cordova told us that don’t worry about making mistakes because we will learn from it and that she wants willing people that learn from those mistakes.
The first day of the training explained the different roles the volunteers will have. There are six roles that she listed which are: Office & Administration; Consulates; Public Relations; Event Organizers; Design & Communications; and Coordination Team. The training also consisted of the background of the current issues around immigration in the Trump era. She gave us examples like that the majority of immigrants are falsely perceived to be Mexican, however; she showed that many people come from South America. What was really troubling to hear is that the immigrants deported from South America are sent to Mexico even though Mexico isn’t their country of origin to begin with. She showed that there is clear discrimination of immigrants and people fail to realize that immigrants offer many contributions to the American Economy.
Ms. Cordova’s first training session was really informative with the issues regarding the current political climate. She also went over issues with the dangers of border crossing and Homeland Security Priority Enforcement Programs. The issues that she covered cemented the reasons why the volunteers were there in the first place. The issues she presented created a need for urgent action and the volunteers showed their humanity in answering that call to action.