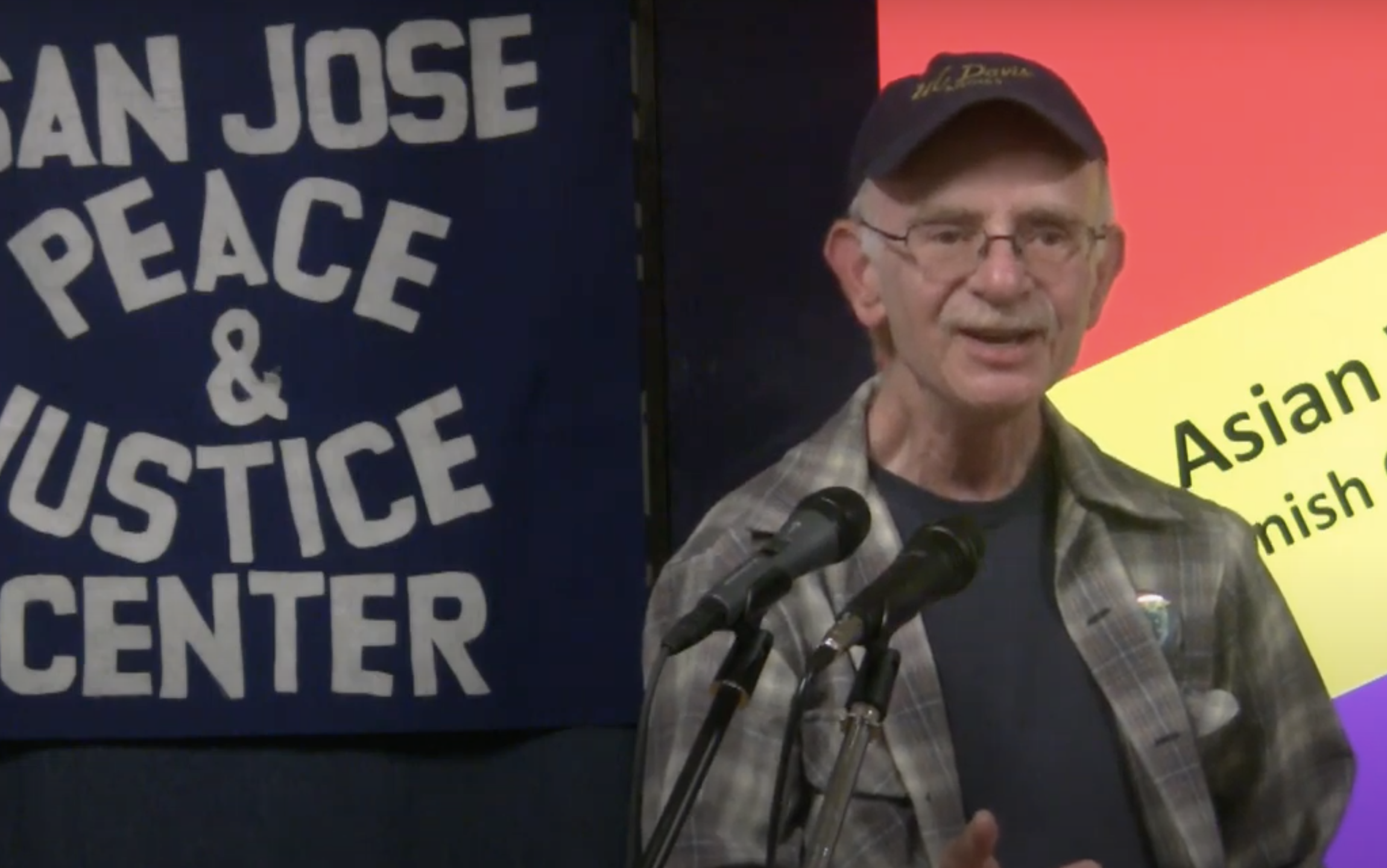 A message from Joan Simon, a SJPJC Coordinating Council Member

As I hunker down in my home during this eerie time of COVID-19, I wonder when or if life will return to normal. I also wonder what the new normal will look like. I really miss those spontaneous hugs and the physical contact. What a lesson to learn – how everything you hold so dear can be taken away in an instant.

A few weeks before I began my physical isolation at home, I helped organize an event that I would like to share.

Let me introduce Peter, a kind and soft-spoken man of few words.    I see Peter as one who understands the world on a multi-level plane, compassionate, political and academic. So when Peter speaks, I listen with both ears!

I met Peter about a year ago, when he signed up to table at my Health Care for All table at the Campbell Farmers Market. In all the time we tabled at the Farmers Market, Peter only missed coming one time. I realized very quickly that he had a deep understanding of U.S. health care system in relation to the rest of the world.

On one of those Sunday mornings when Peter and I were tabling, a man approached our single-payer table and spoke with us. Peter thought he recognized the man’s accent, and asked where he was from. The man said he came from Spain.

Peter stood up from his chair and relayed to the man that his parents were part of the Abraham Lincoln Brigade who fought against fascism in Spain. He explained further that his father was an ambulance driver and his mother was a nurse.  At that moment, the man radiated a bonding with Peter which displayed a deep love and honor in recognition of Peter’s parents. There was such a deep connection between the two men, I had chills of awe.

Imagine – how is it that 3,000 people from the U.S. decided to go to Spain to risk their lives without knowing the language, or even the culture, with the sole purpose of fighting fascism for human justice.

The story of the Abraham Lincoln Brigade is one that peace and justice activists may want to become acquainted with.

In the late 1930’s, Spain was embroiled in a civil war, which prefigured the conflicts of WWII. Approximately 40,000 volunteers from 53 countries joined International Brigades on the Republican side, fighting against the fascists and Nazis.  Of these 40,000 volunteers, about 3,000 were from the U.S.

They came from all walks of life: immigrants, laborers, students, seamen, carpenters, nurses, and teachers. Only one-half survived the war and returned. Those who returned continued their political work in the civil rights struggles, the peace movement, the anti-colonial movement, anti-Vietnam war, and anti-Iraq war.  They raised money to buy ambulances for Nicaragua during Reagan’s contra war.  Many continued to work with unions to support labor struggles.

Peter, working through ALBA, has been working with others to organize a special event that was set to take place in San Francisco on May 3, 2020, in celebration of the restoration of the largest U.S. monument dedicated to the volunteer fighters who fought fascism in Spain. Peter asked if I knew anyone who could speak at the event. As I rattled off a few possibilities, we decided that it would be a good idea to plan an event with two purposes in mind: educate people about the Abraham Lincoln Brigade and hopefully, get interested volunteers to speak at the May 3rd event.**

The event was a film screening of “Forever Activists” which explores the subsequent careers of a number of those who fought in the Abraham Lincoln Brigade.  We had a very successful event on February 26th at the San Jose Peace & Justice with a larger than expected turnout.

Here is a video covering the “Forever Activists” screening event:

**This event has been cancelled or postponed. We will update this post once we receive more information!