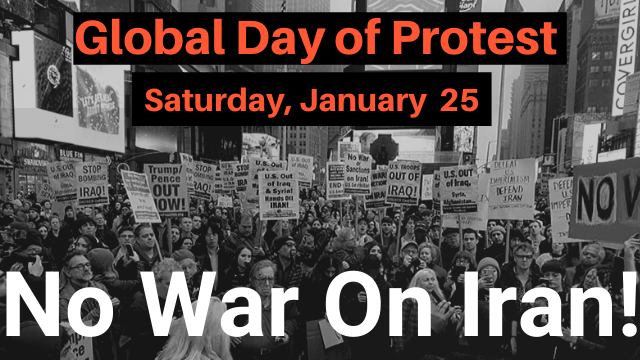 We are at the brink of a third world war, and people around the world need to ACT NOW to prevent tipping over the edge. The anti-war movement must be heard, and the most effective way to escalate our voices is to collectively organize. Below are some local opportunities to get involved:

5PM – Join anti-war activists around the country in the No War With Iran Day of Action at 5pm local time! The San José protest will be happening at Peace Corner (Stevens Creek & Winchester Blvds., Santa Clara) For more information, click this link.

7PM – Party for Socialism and Liberation will be hosting a meeting with reports and discussion to help build for the Global Day of Protest against the U.S. war on Iran on January 25th (at San José Peace and Justice Center, 48 S 7th St.) For more information, click this link.

5PM – On the eve of the 18th anniversary of the opening of Guantanamo, the Friday Peace Vigil will rally to close the prison and to protest the growing threat of war with Iran (in front of MLK Library at 4th & San Fernando Sts.)

6PM – San José Peace and Justice Center, the Friday Peace Vigil, and SJ Code Pink is hosting a discussion about how to build the movement to prevent a war with Iran, to end the sanctions on Iran, and to get US troops out of the Middle East. There will be pizza! (at San José Peace and Justice Center, 48 S 7th St.) More information: click this link.

1PM – GLOBAL DAY OF PROTEST – March to Demand: No War On Iran! Cities across the globe will be protesting against a new war in the Middle East. Take action and join the San José protest! We will march from San José City Hall to the intersection of Story Rd & King Rd. (4th & Santa Clara Sts.) For more information, click this link.

Keep an eye on our Community Calendar to get involved with more upcoming events supporting the anti-war efforts in the South Bay.

After the Iranian attack on the Al Asad and Erbil U.S. military bases in Iraq involving over 20 ballistic missles, American and Iraqi officials reported that there were no casualties involved. Iran took ownership for the attacks as a retaliation to the assassination of Major General Qassim Suleimani on January 3rd, and communicated that it does not seek escalation to war.

President Trump spoke on Wednesday of being ready to “embrace peace with all who seek it.” He then contradicted this claim by proposing harsher sanctions against Iran, which is in itself a form of economic warfare. The imposition of “additional punishing economic sanctions on the Iranian regime” will further negatively impact Iran’s most vulnerable communities by destroying the country’s economy.

The United States intervention in Iran has been raising tensions between the two countries for decades since the 1953 Iranian coup d’état of Prime Minister Mohammad Mossadegh organized and funded by the United States Central Intelligence Agency and Britain’s Secret Intelligence Service to preserve Britain’s authoritarian control of Iran’s oil industry. In present day, the current US president’s administration continues to intervene by pushing regime change in Iran in hopes of implementing a favorable leadership to carry out their agenda and by harming the country’s economy via progressively harsh sanctions.